Beyond mere resilience, ‘grit’ helps employees persevere with long-term goals, and leaders can build it in their teams using a few key strategies, a positive psychology specialist says.

Grit is also about passion, says Michelle McQuaid, noting that American psychologist and researcher Angela Duckworth refers to grit as the trait that “helps us to think of life like it’s the marathon and not just the sprint”.

Resilience, on the other hand, is “a little more moment-by-moment”; it’s “our ability to lean into things that we’re more likely to lean away from”, McQuaid told a recent Talent Web briefing.

“Grit is the long-term picture of that. Can we do that consistently – day-in, day-out; week-in, week-out; month-in, month-out; year-in, year-out?

Leaders need grit and Leaders must build their own grit before they can help their employees do so, McQuaid says.

First, they must be passionate and meaningfully interested in what they want to be “gritty” about both at and away from work.

“Discovering what gives us passion… starts by figuring out what we’re actually interested in. These will be the things that naturally grab your attention. They’re the stuff that you choose to read, or listen to, or watch. They’re the ideas that you keep revisiting over time,” McQuaid says.

Leaders also need to understand the purpose of their role and deliberately practise the skills required to perform, she adds.

Deliberate practice is “effortful practice”, she says, noting it often means breaking down a skill into very specific pieces. A professional swimmer, for example, will deliberately practise the way their arms should move in and out of the water, will ask for feedback, and then will do it all over again the next day.

McQuaid notes that one of the biggest challenges in developing grit is a leader’s definition of success. If they believe success is delivering the perfect outcome, it “hurts” when they fail, but if they see success as learning and developing during the process, failure “gets a whole lot easier”.

“Can we fall down seven times and get up eight is a big piece in terms of how gritty we’re going to be.”

Leaders and individuals can build their own grit and that of their teams by discussing their failures and struggles with other employees, and encouraging employees to share their own, McQuaid says, noting that she used to share her “screw up of the week” with her workers.

“We want to be demanding, we want to help our kids stretch forward so they’ve got those teachable moments while they’re under our care and we can guide them. But we also want to be supportive as they go,” she says.

“The same is believed to be true of us as leaders.” Leaders should also be mindful of the “dangerous areas of grit” that can appear in the workplace, McQuaid adds.

Stupid grit is when someone persists with something, such as a job or relationship, when they know they should have quit long ago, she says.

Selfie grit is when employees do things “for the bragging rights”, where it’s “all about the achievement rather than the grittiness that goes under it”.

“We’re trying to show ‘look at what I’ve accomplished, look at how amazing I am’, and often there’s that underlying lack of self-worth that’s driving us to this kind of behaviour,” McQuaid says by way of example.

“Grit actually tends to be characterised by humility. The most gritty people probably aren’t waving their accomplishments in front of your face, they’re quietly getting on with it.”

Finally, fake grit is when an employee will cheat to feel more confident and “get that grit happening”. 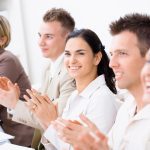 Leaders with Humour have much more influenceUncategorized